Startled, Daulton whipped around and leveled his rifle. “Who’s there?”

A head poked out from around the structure then disappeared.

“Hello?” Cautious in his approach, Daulton moved toward the building. His steady finger hovered over the trigger. “If you don’t want me to start blasting you better come out where I can see you!” 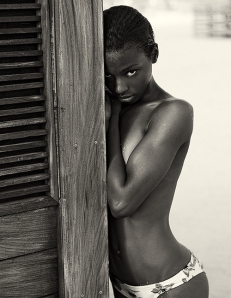 A brown skinned beauty stepped out from her hiding place, her eyes lowered bashfully. She lingered around the corner of the building, timid in her actions.

“This is a war zone, lady. What the hell are you doing out here?” he asked, lowering his weapon. “More so, where’d you come from? And where are your uhhh…” As he closed the distance between them, he tried to refrain from running his gaze over her breasts and petite curves, but failed. “Where are your clothes?”

“Please, come with me.” She took his hand in hers, tugged him inward and nodded toward the ocean.

Baffled but curious, he followed along and allowed her to lead him to the shore. A dark massive form came into view. They drew closer and his heart literally shuddered to a stop.

“What in God’s name!” Daulton jerked back, clutching his rifle.

The reptilian creature raised its head, bawled softly and then fell in a heap on its side. Its leathery extensions flared out then plopped weakly into the sand. Bright blue liquid oozed from small holes riddled along its belly.

“Is―is that a… a freakin’ dragon?” he gasped in shock.

“Yes, a dragon. She is my mother and as you can see she has been injured. While we were taking our morning swim, your human comrades viciously attacked her,” the woman sneered, her sweet voice tainted in fury. “I fear they mean to finish her off. We need your help.”

Before any of you ask, YES, this is a snippet from a novel I’m working on―a short story for The Dragon Queen Series, due to release next year. 😉 I can’t wait for you guys to read it.

And while we’re on the topic of dragons…

Tom Wood, an amazing artist I met at the Dragon*Con this year, is selling signed copies of his book Hellfire: Plague of Dragons. I absolutely fell in love with this man’s artwork when I met him. If you are a lover of dragons and fantasy creatures, you’ll fall in love too.

In the fourteenth century, a horrific plague swept out from the barbaric East to decimate the great nations of Europe. This killer that spared no man, woman, or child — the Black Death — is well-known and documented. But there was also a second disaster that occurred at the same time, no less brutal than the Black Death, a living plague that killed without mercy which has gone untold and unrecorded — until now. A plague consisting of a horde of monstrous beasts unlike any seen before, or since: a plague of dragons.

CLICK HERE to score your signed copy of Hellfire: Plague of Dragons! There’s only a limited supply so don’t miss out on this great offer.

Until next time, my lovelies…