It’s custom for me to pimp my fellow authors who offer their books for my giveaways, but it’s been a long time since I‘ve pimped a friend simply because they’re AWESOME. I plan to do that more often, because there are sooo many wonderful stories out there to read, and soo many hungry eyes waiting for them.

If you love Interracial Paranormal Romance and want a sexy read for Halloween, you’ll love this!

Dr Shibah Kusi is a woman who lives by 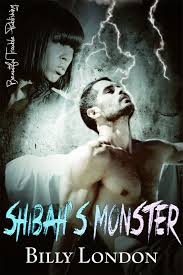 the rules of science. There isn’t anything that cannot be explained or rationalised by what she’s learned in her work as a pathologist. It’s kept her grounded and it has kept her sane. Until one night, in the depths of the mortuary, she comes face to face with the dead body of her childhood crush, Marek Kaszynski. All she wants at that moment, on seeing the man she’d always been in love with dead, was to bring him back to life. Change their future to reflect the promise of their history. At just past midnight, everything she wants is about to rise from the jaws of death. In spite of everything she’s learned and everything she knows, Shibah will do anything to protect Marek. He’s hers.

Shibah was past wide awake. This was a state of complete chemical alteration, with Marek’s unrelenting erection pressing between her thighs. She wanted to blame her wet underwear on the shower, but this was a metronome of sexual need counting down to how long it would take for her to succumb. Get up, get up, get up five minutes ago, get up!

This couldn’t be good for his circulation. It took a good fifteen minutes of struggling but she eventually broke Marek’s hold and slipped from his body. With a foot braced against her old mattress, she heaved him onto his side and into a foetal position. The man slept like the dead.

Was he dead? She stared at him until she could see the rise and fall of his body. Closing the door behind her, she made her way to her parents’ room and sat on the bed in her damp towel.

What else could she do for now? No way could she sleep knowing her reincarnated childhood sweetheart was in the next room regenerating or something.

Oh God, he’d beaten that security guard to death. Well, it was either that or genital worms would have got Aaron. The sexual hazard of sticking one’s genitals into corpses. A snort of laughter escaped her before they quickly became sobs. Now what? Now fucking what? Her bag vibrated and she jumped a foot into the air. Kevin.

“At my parents. Just easier to get here. I didn’t want to drive for ages after such a long shift.” How easy it was to lie.

“I’m fine. Honestly,” she forced lightness into her tone. Why was he doing this? He should have made this sort of effort months ago.

“Well, call me in the morning”

She ended the call before he asked why she didn’t say it back. I love a monster and that means I couldn’t have ever really loved Kevin, she whispered. Maybe if she got a little sleep she could start to process what her next steps were. And they had to be smarter than covering up a murder. Arranging herself on top of the duvet and beneath an electric blanket, Shibah forced her eyes closed and practised some deep breathing. Space. Calm. Breathe. Marek. Hearts. Marek drawing hearts on me. My wrist. My tummy. Between my legs with his tongue. No, no. He never touched me, he only kissed me once. And that kiss had been erotic perfection. He crossed her mind every time anyone looked at her in an even vaguely sexual way. Space. Calm. Breathe. Repeating the phrase over and over seemed to help, the warmth of the blanket lulling her into sleep.

She was back inside the lab. Marek was prostrate on the mortuary table in front of her. As she’d done before, she lifted his hand to her lips, tracing her thumb over the heart tattoo. His pulse jumped under her lips and her gaze fell on his face, still grey and waxy. Her hand traced over his forehead and she watched as sparks flew between their skins. White orbs fixed on her, his hand large and strong caught the edge of her lab coat, pushing it away. Obeying the silent command, Shibah allowed the lab coat to fall to the floor, leaving her in a simple pencil skirt and white blouse.

“Lift it up,” he commanded, his voice still sounding as if his voice box had been grated. She caught the hem of her skirt and pulled it above her waist. His fingers felt rough against her bare thighs. She couldn’t help her own shock at how dark she looked against his hand, even as it rose higher, scraping over her panties. Her breath locked in her throat
as soon as he touched her beneath the lace. A gasp—desire and surprise—sounded loudly in the lab. Skin slipped against skin, Marek’s hand moving higher along her thighs, until he parted her sex and sank his fingers deep inside her. She rocked against his hand and almost lost her voice when he caught her just where she needed him. The response of her body skated down her legs and coated Marek’s fingers. Her eyes flew open at the sound of his grunt of pain. She glanced down and saw stark red half moon circles where her nails had dug into the flesh of his torso. “Sorry,” she heaved.

“Come here,” he said in quiet invitation. She stripped off her skirt and panties before straddling him on the table with ease. He burned her with the heat of his cock, the tip brushing over her clit. Oh, God, how she remembered this fire! Sweat beaded between her breasts and at the small of her back. Marek caught her hips with hands that bit into her flesh, forcing her to look at him. The whiteness in his eyes had given way to that startling silver of her sweetheart.

“Take it,” he urged. Slowly she sank down onto him, the thickness of his cock pushing into her, spreading her little by little. She leaned down onto his chest and touched his cheek bones with the tips of her fingers.

“Every time,” she whispered, “every time I did this, I wished it was you.”

Oooo, that was sexy! Click on the cover image to get your copy of Shibah’s Monster today!

For those of you with a Kindle, Shibah’s Monster is also available on Amazon: http://amzn.com/B00ES6AO26

Hey, if you’re in the mood to win some great Halloween Reads, enter Sam Cheever’s Trick or Treat contest. It’s so easy to enter and even easier to win.

The giveaway is over on Halloween, so don’t miss out on your chance to win a massive amount of prizes and books, including the new Kindle Paperwhite Ereader!